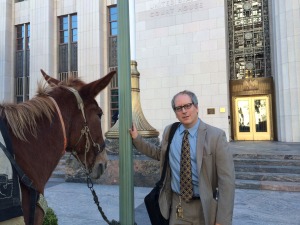 Dan Kapelovitz has devoted his law practice to representing people caught up in the criminal justice system.

Dan is a Certified Criminal Law Specialist, certified by the California Board of Legal Specialization.  In addition to being a criminal defense attorney, Dan teaches Criminal Procedure and Evidence at the People’s College of Law.

Dan earned his law degree from UCLA School of Law, graduating in the top ten of his class.  At UCLA, he was the President of the Animal Law Society, on Law Review, volunteered for the Innocence Project and the Prisoner Re-Entry Project, and worked on special circumstances murder cases and other criminal matters for the Los Angeles County Public Defender as part of UCLA’s Capital Punishment Clinic.

During law school, Dan externed at the Working People’s Law Center, where he worked on criminal law cases, helping obtain a new trial for a client due to juror misconduct.  He also served as a law clerk for the Animal Protection Unit of the Los Angeles City Attorney, working on animal abuse and neglect cases.

After graduating law school, Dan was an associate attorney at one of the oldest law firms in Los Angeles, where he was the lead attorney on a successful asylum case, worked on a successful

Dan then clerked for a federal judge for the United States District Court of the Central District of California.

After his clerkship, Dan tried or prepared for trial dozens of cases for the Los Angeles City Attorney.  He soon decided to devote his efforts to criminal defense to help those who have found themselves caught up in the criminal justice system.  He has successfully defended hundreds of people who were facing criminal charges.

Before becoming a lawyer, Dan had a successful career in journalism.  He was the Features Editor of Hustler Magazine, and wrote more than 100 articles for numerous publications, including the LA Weekly, OC Weekly, Bizarre Magazine, Men’s Edge, and more.  At Hustler Magazine, Dan won the Project Censored Award for his reporting on depleted uranium, and was the editorial point man for Larry Flynt’s First Amendment lawsuit against the Pentagon.

Now, Dan fights for the rights and freedom of his clients, human and non-human alike. No case is too big or too small.  If you or someone you care about has been charged with a crime or needs other legal help, call the Law Offices of Daniel I. Kapelovitz today!  (323) 839-6227.