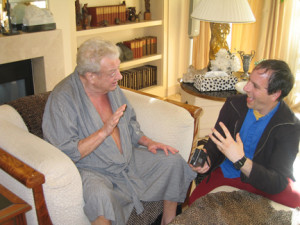 A security guard of a high-rent high-rise in the trendy Westwood section of Los Angeles escorts me, a photographer and her assistant to an elevator. We ride up more than 20 floors, and the doors open directly into Rodney Dangerfield’s deluxe apartment in the sky.

His blond, beautiful and much younger wife, Joan, invites us in. I had imagined that Rodney would greet us in his trademark white shirt and red tie (one such outfit is on permanent display at the Smithsonian), but to my surprise he’s wearing nothing but a gray bathrobe. Even more shocking, it’s wide open, and the Hustler entourage unintentionally catches a glimpse of the comic genius’s penis before he ties up the garment.

How many people have seen Rodney Dangerfield’s cock? I wonder, but then I remember that according to his just-released autobiography, there have been quite a few. It’s Not Easy Bein’ Me (HarperEntertainment) tells the lowbrow story of a man born Jacob Cohen in Babylon, Long Island, on November 22, 1921. Eventually Cohen changed his name to Jack Roy and had limited success as a comedian in his late teens and 20s. To support his family, the struggling comic quit showbiz and sold aluminum siding for 12 years.

Turning 40, he took on the moniker Rodney Dangerfield and became one of the greatest comedians of all time. Besides starring in numerous films (Caddyshack, Back to School, Easy Money, Natural Born Killers among others) and HBO specials, the funnyman owns a thriving comedy club in Manhattan (Dangerfield’s) and won a 1981 Grammy for his album No Respect.

In addition to detailing Dangerfield’s extraordinary career, his new tome offers stories about his sex life, his love of marijuana and his medical problems. (He’s undergone brain surgery, heart surgery and was once in a coma.) While the man’s health may not be the greatest, his mind seems as sharp as ever.

The Dangerfields’ lavish home is decorated with much Rodney memorabilia, including various awards, sculptured likenesses, photos with other celebrities, and pictures of the entertainer with a notable lion also named Rodney. A direct descendant of the original studio lion, the big cat is quartered at Las Vegas’s MGM Grand Hotel, where the comedian has performed for years.

After our tour of the Dangerfield manor (whose master bedroom, by the way, has a hot tub so huge that it had to be helicoptered in), it’s time to get the comedian talking. Our photographer’s cannabis-loving assistant offers a couple of joints she brought specifically for the octogenarian, one of which he lights up during the following conversation.

KAPELOVITZ: Did you legally change your name to Rodney Dangerfield?

DANGERFIELD: Legally, my name is Jack Roy. Rodney Dangerfield is a trade name.

KAPELOVITZ: What does your wife call you?

KAPELOVITZ: How much time did you spend writing It’s Not Easy Bein’ Me?

DANGERFIELD: It took me three years to write the book.

KAPELOVITZ: Did you use a ghostwriter?

DANGERFIELD: No, I did it myself. I made a deal with Fox to make a movie out of it.

KAPELOVITZ: Are you going to play yourself?

DANGERFIELD: I don’t know if I can play myself when I’m 40 years old.

KAPELOVITZ: Do you read Hustler Magazine?

DANGERFIELD: I tried to get a yearly subscription. To tell you the truth, I don’t read Hustler. It’s not a bad magazine. I’m not putting it down or anything, but is it really something that I would look forward to? I don’t read anything.

KAPELOVITZ: Is it true that you recorded gay comedy albums in the ’60s?

DANGERFIELD: How do they start these rumors? Jesus Christ!

KAPELOVITZ: There are 45s with the name Rodney Dangerfield on them. One song is titled “Stanley the Manly Transvestite.”

DANGERFIELD: I’m not singing that.

KAPELOVITZ: How long have you smoked pot?

DANGERFIELD: I’ve been smoking pot for many years. It’s something that I find very relaxing. Most doctors say I should smoke pot rather than drink if I want to relax. In fact, I have a card. It’s legal for me to smoke pot in California. A lot of people use it for high blood pressure, eye problems. A lot of people need it; I guess I’m one of them.

KAPELOVITZ: Have you dabbled with other banned substances?

DANGERFIELD: Years ago I did cocaine for a couple of weeks. That wasn’t good.

KAPELOVITZ: You never dropped LSD in the ’60s, when you weren’t recording those gay comedy albums?

KAPELOVITZ: Do you come up with better jokes when you’re high?

DANGERFIELD: Sometimes, I guess. What pot does for you is not [help to] write better jokes, but it gives you the patience to write them. You don’t mind the work.

KAPELOVITZ: How much marijuana do you smoke on a daily basis?

DANGERFIELD: It varies. It could be nothing to two joints.

KAPELOVITZ: How does it make you feel?

DANGERFIELD: Well, let me see. It’s a little soon to find out, but I’ll take one more hit. [Puffs on joint.]

KAPELOVITZ: Does your wife smoke weed?

DANGERFIELD: No, she’s from Utah.

KAPELOVITZ: In real life you’re married to a Mormon, and you portrayed a polygamist in the film My 5 Wives. Do you believe that polygamy should be legalized?

DANGERFIELD: Like the Mormons? What kind of man takes his 14-year-old daughter and tells her, “I want you to live over there now with my cousin Anthony. He has 12 wives, you’ll be the 13th, and you stay with him and do whatever he says”? How can a man do that to his daughter, telling her to go over and start fucking her second cousin? That’s really fuckin’ insane.

DANGERFIELD: That’s right. When I had my brain surgery, I was in a coma for nine and a half days. I came out, and Joan says, “What do you wanna watch?” I said, “Is Jerry Springer on?” That went around the whole world, that I asked to see Jerry Springer the first thing after my brain operation; so he sent me all kinds of tapes of his shows.

KAPELOVITZ: In Jim Carrey’s foreword to your book, he writes that you’re an extremely nice guy for not cold-cocking those who come up to you and say, “Hey, Rodney, I’ll give you some respect.” Have you ever tried to come up with a new catchphrase?

KAPELOVITZ: Do you have a lot of crazy fans?

DANGERFIELD: No, I don’t get that. Everybody gets weird letters from fans, but I don’t have any problems with them from a physical point of view. “Hey, Rodney!”Ã‘that’s nothing.

KAPELOVITZ: What about groupies?

DANGERFIELD: At my age and for what I do, there are no groupies. When you’re a musician and 20 years old, there’s plenty of groupies. I never heard of a girl yet who ran away with an accountant.

KAPELOVITZ: How many girls have you been with in your life?

DANGERFIELD: Jesus, I don’t know. It’s easier if you ask a 21-year-old kid, but I got to do a lot of thinking.

DANGERFIELD: I never really counted. I also wrote, “Don’t think I got a lot of women; this was over a span of 60 years.”

KAPELOVITZ: How old were you when you lost your virginity?

DANGERFIELD: I don’t know, probably my early 20s, around then.

KAPELOVITZ: Do you remember the girl?

DANGERFIELD: Jesus, that’s tough. Man, you give me tough questions.

KAPELOVITZ: Have you ever had sex with a celebrity?

KAPELOVITZ: There’s a creepy account in your book about when you were five years old, and a man used to pay you a nickel to sit on his lap and let him kiss you.

DANGERFIELD: For that kind of money I’d become a criminal. It’s all true. I took a walk in a busy street, and look what happened to me. I had no supervision at all.

KAPELOVITZ: Has that experience messed up your mind?

KAPELOVITZ: Did being molested screw you up?

DANGERFIELD: No. I forgot about it.

KAPELOVITZ: What would you change about your life?

KAPELOVITZ: Please give us a new joke.

DANGERFIELD: “I’m getting old. I had an accident. I got arrested for hit and walk.”

DANGERFIELD: I’ve watched it occasionally, when it comes on. It’s the weirdest thing, television today. You’ll be watching a sermon of some kind on a religious channel. You switch channels, and all of a sudden you see two naked people on top of each other. But one contrasts the other. That’s funnyÃ‘to me, anyway. I’ve hung around Ron Jeremy quite a bit. I’ve used him in some HBO shows and two movies.

KAPELOVITZ: Do you think Ron Jeremy is a good comedian?

DANGERFIELD: I don’t know. He fits what I’m doing.

KAPELOVITZ: What did you think of Janet Jackson’s breast popping out at the Super Bowl?

DANGERFIELD: If you want to stay hot in the business, do what she did. Her name was mentioned all over the place.

KAPELOVITZ: Have you ever pulled any publicity stunts?

DANGERFIELD: Once I went down on a shark to stay hot in the business.

KAPELOVITZ: Do you think there’s an afterlife?

DANGERFIELD: I don’t know. But if there is, where I’m going, I’m going to need plenty of air conditioning.

(This article first appeared in the October 2004 issue of Hustler Magazine.)